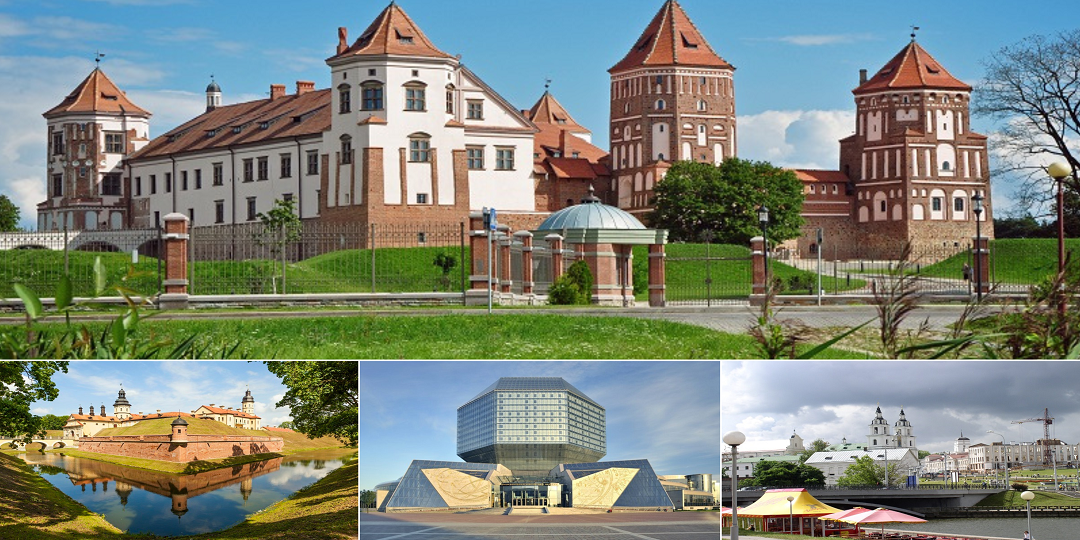 Perhaps Belarus is not one of the most selected tourist destinations, according to data it ranked 74th in the world and 6th in Eastern Europe in terms of tourists per resident. Although from 2019 to 2020 the amount of USD generated from the tourism sector decreased by 58% ($ 1.29 billion in 2019 and $542.00 million in 2020), Belarus still has many attractions to offer. Especially being an Eastern European country, you can solely have castle tours of your own in Belarus. With different architectural styles, from different periods and for different purposes Belarus stands for its historically rich castles and fortresses. Some of the most famous ones are; the Mir Castle, the Nesvizh Castle, and National Historical and Cultural Museum and Reserve Niasvizh, the Lida Castle, the Kosava Castle, the Grodno Fortress, the Brest Fortress, and more. Imagine visiting the Mir Castle, constructed in the 15th century and served as a fortress for enemy attacks, became a war prison during WWII, and then a factory during the Soviet Era.

Here we have shared some important tourist places in Belarus with their details:- 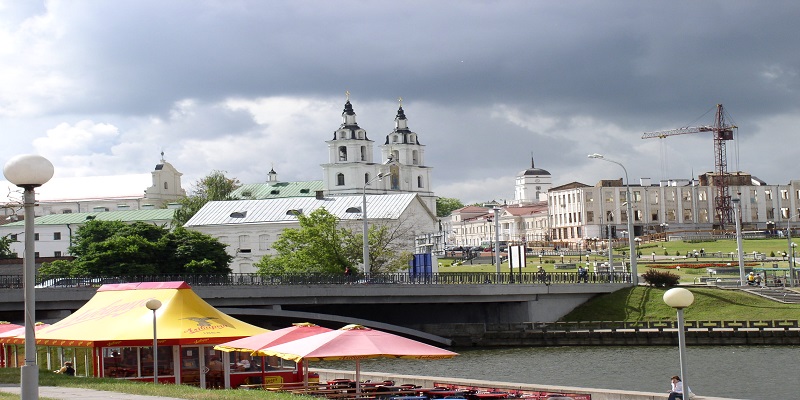 Roughly 100,000 tourists visit Belarus annually, with almost all of them getting to experience the vibrancy of the Upper Town in Minsk. Located right in the heart of the nation’s capital, the Upper Town is a cosmopolitan hub that is home to stunning early 19th-century architecture, shops, bars, restaurants, and world-renowned coffee shops.

The famous block-paved streets are the means of getting around the Upper Town, with the area often playing host to live music and open parties during the peak summer tourist season. For those traveling during the winter months, Christmas fairs are usually one of the main attractions the Upper Town has to offer. 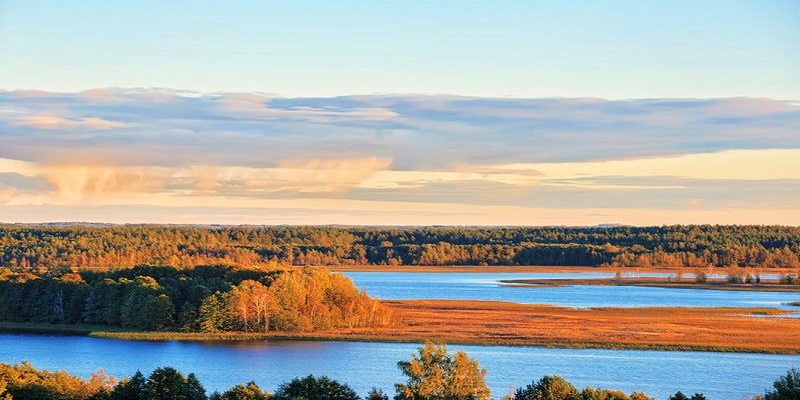 From my perspective, the Braslav Lake Area consists primarily of glacial relics and is recommended by every Belarus tourist guide as a must-see. The region is commonly known as the Blue Necklace of Belarus because of its turquoise waterways. The rocky topography of Belarus is interlaced with cliffs and bays, and the lakes are home to numerous fish species. In Belarus, bird watching is a popular pastime alongside climbing and hiking. Numerous rocks pushed down by the glacier can be observed here, with some weighing around a ton. Due to their size and shape, some of these Belarus sights are known as Cow’s Stone and Devil’s Footprint. These attractions include amusement park rides and an observation wheel with a breathtaking perspective of the city. 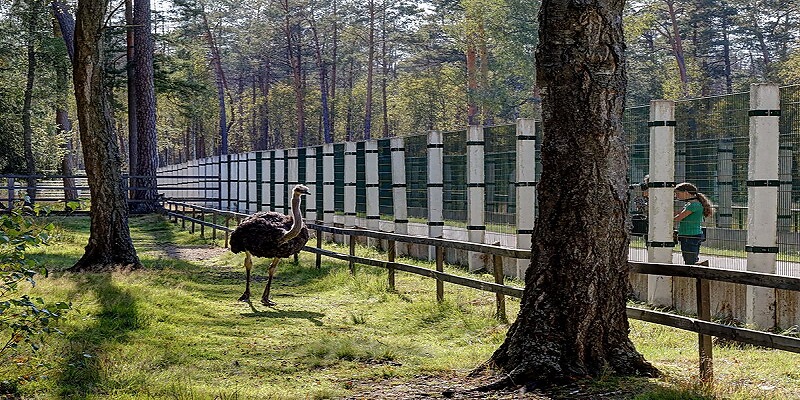 My opinion is that the Belovezhskaya Pushcha National Park in Belarus and adjacent Poland is a UNESCO World Heritage Site. A protected land area is also present. This Belarus attraction is renowned for its verdant scenery and variety of flora and fauna, with the European bison being the most notable. This is one of the few sites where these regal animals may be observed in their native habitat. In addition to bison, other Belarusian attractions include Eurasian elk, wild boar, and a type of semi-wild horse known as the Konik. During the winter months, a holiday museum showcasing the Belarusian version of Santa Claus can be found in the park as a tourist attraction in Belarus that is certain to be a favorite with young tourists.

The Belovezhskaya Pushcha is a primeval forest that is located about 60 km north of Brest, Belarus by taxi or bus, and it also happens to be the oldest wildlife refuge in Europe that has been successfully preserved in a relatively undisturbed state, hence why it is included in the UNESCO World Heritage List. It remains home to a wide variety of rare plants and trees, as well as birds, insects, and animals, with notable species such as the European bison, wolf, and lynx. It is also a source of local legend, as many Belarusian people mythicize that Santa Claus lives there. And as for those lovers of history, it is also a place that is known to have hosted the infamous Belovezha Accords that effectively initiated the dissolution of the Soviet Union in 1991. Plus, it is also a great place for tourists looking for a great place to take long walks, have a picnic or take part in fun outdoor activities like hiking and biking trails.

The Belovezhskaya Pushcha National Park is undoubtedly Belarus’s top attraction for nature lovers, as it closely resembles the woodlands that once blanketed much of Europe in the Middle Ages. The national park is home to enormous free-roaming creatures including bison, elk, wild horses, and wild boar in addition to amazing tall trees and lush flora all around. Since 1979, the park has been a UNESCO World Heritage Site.

The park is also home to the Eurasian Elk, wolf, lynx, wild boar, and a semi-wild breed of horses, the tarpan, which is native to the area. There are over 300 species to discover, as well as over 1000 species of trees, plants, and flowers. The park has an Eco Education Centre, which includes the Museum of Nature. A visit will provide an interesting and insightful experience for anyone interested in the natural world.

During the winter, it’s an even more exciting destination for younger explorers, as it embraces all things festive. With a zoo, library, and museum on site, there are abundant opportunities for entertainment and education. Vehicles aren’t allowed to enter the park without a permit, so it’s best to go as part of an organized tour. You can stay on-site at the Kamenyuki Hotel, or stay in nearby Brest and catch a shuttle bus. This incredible location is well worth a visit. 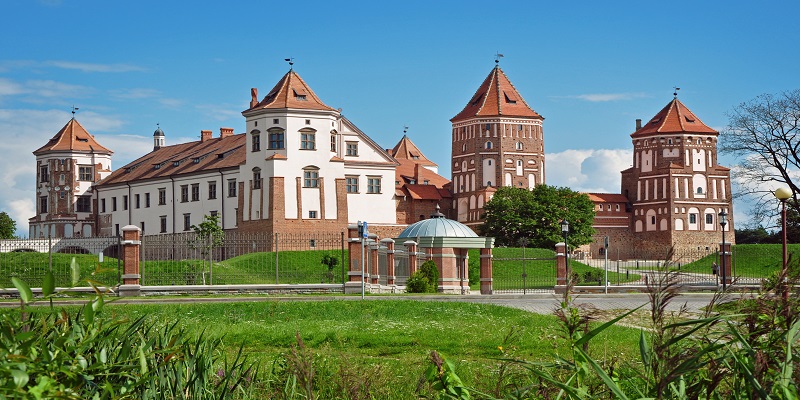 Mir Castle, located in the Grodno area, is one of the most popular tourist destinations in Belarus. It was constructed in the 16th century. This impressive structure is tightly enclosed by fortress walls and was built in the Baroque, Gothic, and Renaissance periods. The enormous artificial lake and beautiful Italian-style flower gardens on the grounds of the castle are popular attractions. Although it was severely damaged by cannon fire in the days of old, the castle has since been meticulously restored to its former splendor, making it a UNESCO World Heritage Site and providing a breathtaking glimpse at some of the greatest architecture in Belarus.

Mir Castle is located quite close to Minsk, just 90 km southwest of the capital of Belarus, and best of all, it is possible to stay in the castle! since it has rooms for guests and is a kind of castle hotel as well as a National Heritage and Museum.

This medieval fortress has a square floor plan, its sides measure 75 meters, and the towers reach up to 27 meters. And its walls are up to 3 meters thick.

The Grodno region is certainly worthy of a place on your travel itinerary. Originally built in the sixteenth century, this castle has been painstakingly restored to reflect its former glory. A UNESCO World Heritage Site, Mir Castle has some stunning and diverse architectural features, including Gothic, Baroque, and Renaissance Influences.

The Italian-style flower gardens are fragrant, picturesque, and beautiful, and will inspire your inner artist. The entire castle and its surroundings are supremely photogenic and provide plenty of opportunities to indulge your creative side. For those who are interested in history, there are 39 exhibition stalls, along with theatrical and thematic tours, and sightseeing excursions. Visitors can enjoy local cuisine in the restaurant, and for weekend guests, this is accompanied by music from Belarusian bands and performers.

For a truly immersive experience, guests can choose to stay in the castle hotel. However, it’s just 90km from Minsk, and easily accessible by road. So, a day trip by bus or car is a practical option. The town Novogrudok is just 40km away and has a variety of hotels to choose from, for those who want a shorter journey. 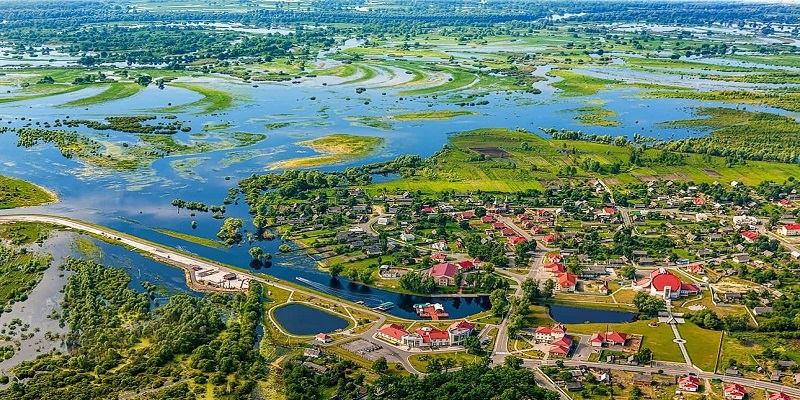 Pripyatsky Valley, where Pripyatsky National Park is located, is also known as the Belarus Amazon because of the incredible variety of woods and marshes that can be found there. There is a wide variety of animals to shoot on safari, which is a favorite pastime for the many tourists that go to the area. The park is home to 51 different mammal species, including common ones like deer, elk, raccoons, and beavers, and uncommon ones like lynx and mink. Over 250 species of birds make the Pripyat River their winter home, making it a fantastic spot for birdwatchers. Take a boat ride down the river to get up and personal with the aquatic species, or go on a fishing or hunting expedition to get a feel for the area. Those interested in a more organized excursion to the region might visit the Nature Museum located there. 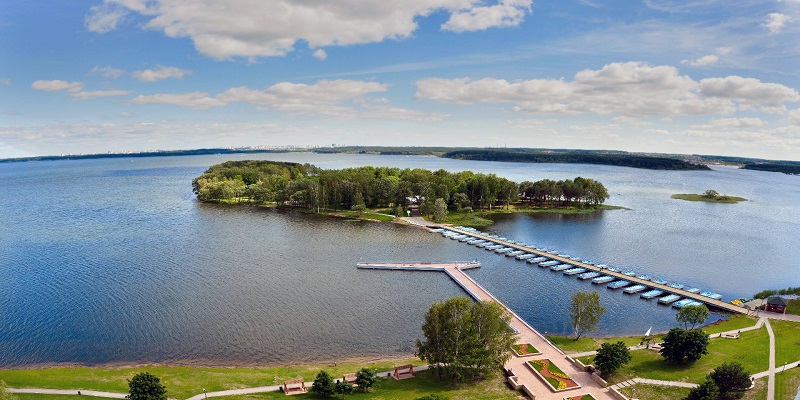 The Minsk Sea, just north of the city of Minsk, is a reservoir explicitly built for recreational use. It is a favorite destination for residents and visitors during the warm summer months in Belarus. The coastline has beautiful beaches, cute cafés, and delicious eateries serving regional specialties. You may hire a pedal or a catamaran and explore the sea for yourself, taking in the beautiful scenery of the coast and inland areas. From Minsk, there are express trains that go directly to the coast. 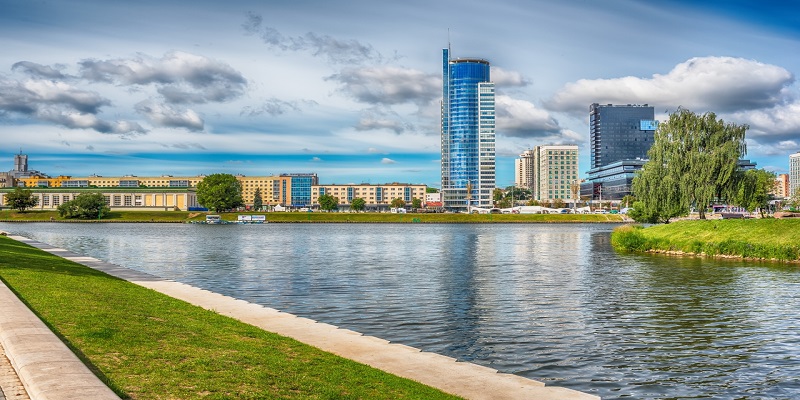 Along with various odd Soviet-era structures, the city is home to many bicycle routes that go through its many lush parks. The city doesn’t have a lot of historical structures because World War II obliterated most of them. However, Minsk is spacious, spotless, and reasonably priced. The National Art Museum of the Republic of Belarus is among the city’s many museums, and Minsk also boasts a magnificent opera theatre. To get to Minsk one must either (a) fly to somewhere like Turkey, Dubai, or the Caucuses and catch a connecting flight or (b) fly to Russia and then catch a connecting flight, which is cheaper if visiting both Russia and Belarus together as you will have a visa to Russia in that case.

National Library of Belarus in Minsk 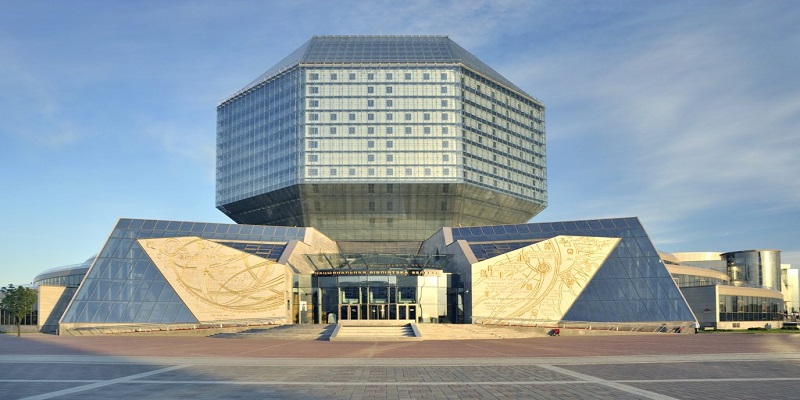 The National Library is one of the most famous and well-known buildings in the capital of Belarus due in large part to its curious design. Not far from Minsk are two of the great treasures of Belarus, 2 UNESCO World Heritage castles.

It is easy to get to them by bus or train, or better to rent a car or hire one of the excursions that depart from Minsk (mostly in Russian and only on some summer dates, they are offered in English). 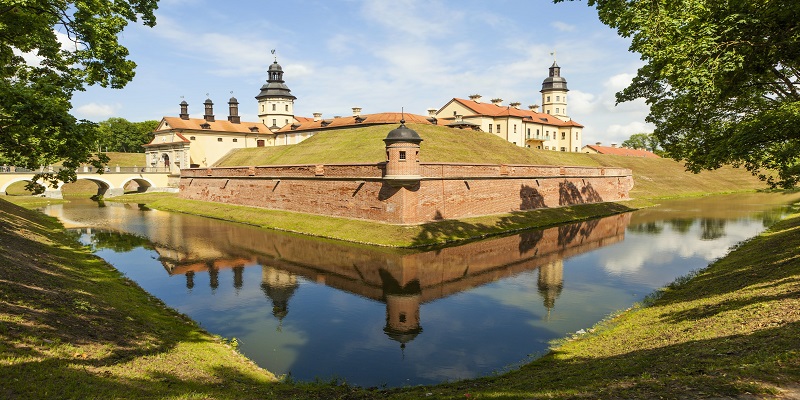 It is located in a small town called Nesvizh, about 130 kilometers from Minsk. Near a bucolic landscape and surrounded by lakes. The castle was built in the 1600s and has been rebuilt several times. The palace is an island-type complex and is built on a hill. It is surrounded by a moat with water, which makes Nesvizh Castle even more beautiful.

It is possible to rent a period dress and walk through the castle courtyards as if it were a trip back in time. Belarus is largely unknown to the general public, one of the few destinations in Europe yet to be discovered. 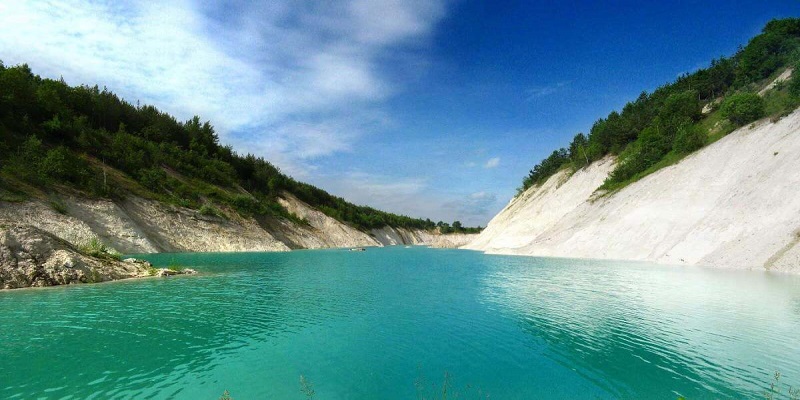 There are several places in Belarus among which the most magnificent attraction I find is the chalk pits. These chalk pits are also called Belarus Maldives. Turquoise blue water and the white cliff are what make this cliff more attractive. The best time to visit the cliffs is in summer, many romantics rush to this place as the tempting view is very mesmerizing. I would also recommend an overnight stay near the breathtaking point of the earth

These places have something special about them. It has an essence of resistance as time passes and people change, they stand still in their time capsule.

Places in Rome – Where You will Fall in Love