Reasons for Norway’s Midnight Sun and The People’s Lifestyles 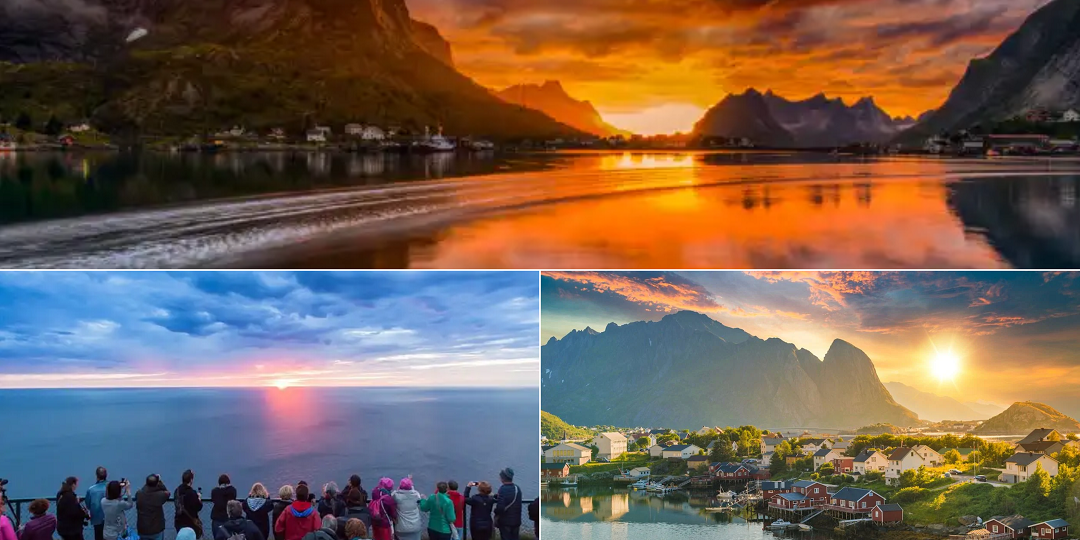 Norway has midnight sun in June and July, but the sunset is not really midnight. The sun actually set around 10 pm. It also depends on the location, Oslo is around 8-9 pm and Northern Norway’s areas are 9-10 pm.

During the months of the midnight sun, there are no clear boundaries between day and night. At midnight the sun is low in the sky, which casts a magical glow onto the coastline and mountains. The midnight sun phenomenon has a great impact on the locals and it is not uncommon to see them out enjoying “day” activities during the late hours – this is due to the freedom the extra hours of daylight give you. The light also seems to make locals more energetic, and kids’ bedtimes more flexible. It is not hard to imagine that after a long and dark winter, this is highly welcomed. It definitely makes you appreciate the change of seasons.

There is nothing like the feeling of the first rays of sun after a long and dark winter. Norwegians love this feeling so much that we have created our own word for it; ‘Våryrhet’. As the days become warmer Norwegians are quick to spend every moment available outside – drink in hand, either in the park, at a cafe with an ‘Utepils’ (directly translated ‘outdoor beer’), a grill, and some friends. The indescribable euphoria might have something to do with how light the days are and how it affects your hormones in the body, and give us more energy. Popular activities during these months for both locals and Up Norway guests are hiking and other outdoor activities. As Norway is famous for its nature, some options to explore during the lighter hours are to go kayaking or swimming in the arctic waters. It might not be tropical temperatures, but it is definitely refreshing. Some of the beaches in Northern Norway actually do have that tropical feel, with bone-white sand.

The midnight sun also plays an important part in the great berry quality we have in Northern Norway. Salts from the sea, fertilizer from the birds, and the midnight sun, shining for 2.5 months straight during the summer are important factors to the unique quality and quantity of the berries.

The Midnight Sun refers to the extended period of daylight that happens North of the Artic circle during the summer months (End of May to End of July). Because the earth’s axis is tilted towards the sun during these summer months, you get extended daylight, sometimes up to 20 hours of sunlight per day.

I have visited Norway several times and have experienced this phenomenon in both Norway and also Alaska.

The first time I stayed there was a 2-week vacation where I was touring Norway and Sweden. It took several days to get used to the continuous light. After acclimating it’s really interesting because you sleep maybe 5-6 hours per 24-hour cycle instead of the typical 7-8 hours of sleep. It seems to make sense as studies have shown natural light exposure increases mental health and productivity.

Tromso is an amazing city to experience the Midnight Sun life as they have festivals and concerts at normally sleep hours but during daylight. With that being said, actually living there seems to have negative side effects. Locals described trouble sleeping (which makes sense), hyperactivity, and fatigue, and most said that there is a second adjustment period and after a few years of experiencing it, you can learn to cope with it. They also said that making a schedule and sticking to it is important for finding any sense of normalcy during the summer months.

The Midnight Sun system in Norway is caused by the country’s location near the North Pole. The tilt of the Earth’s axis causes the sun to be visible for a longer period of time in the summer than in the winter. This means that people in Norway can enjoy daylight for up to 24 hours a day during the summer months.

The Midnight Sun also has a significant impact on the economy. The tourism industry accounts for a large percentage of Norway’s GDP. In addition, the extended hours of daylight have led to the development of innovative technologies such as solar energy.

The reason for this is that the Earth’s axis is tilted. The Earth’s axis is tilted at 23.5 degrees. This means that even though the Earth is rotating on its own axis, it rotates about 23.5 degrees differently from all other planets in our solar system. The result of this tilt on the rotation is that even though Norway has a midnight sun, its sunlight/twilight hours are longer than midnight sun hours in Southern Hemisphere (like in Australia), which has summer solstice seasons that are similar to Norway’s winter solstice with midnight suns cycle).